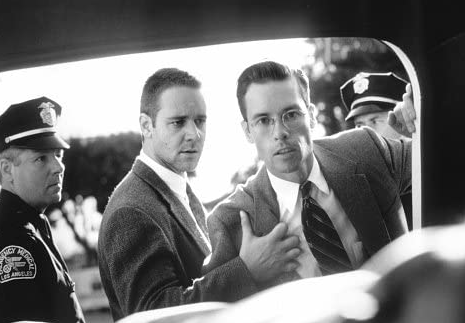 No, the good cop/bad cop Hollywood trope has nothing to do with the climate emergency, but this year's intergovernmental gathering on climate change, COP 27, may finally result in meaningful change. Pictured above, Russell Crowe restrains Guy Pearce in L.A. Confidential. (Photo: Warner Brothers)

For the 27th time, nations will convene to address the climate emergency at COP 27 — the “Convention of Parties” initiated in 1992 by the United Nations Framework Convention on Climate Change. For humanity, it’s a time of hope — and futility.

Yet after 26 years of mostly annual meetings, global emissions continue to rise. The past 8 years were the hottest on record, and there’s little hope the highest-offending nations will meet their stated goals to significantly reduce greenhouse gas emissions this decade.

The Paris Agreement of 2015 triggered hope after COP 21, when nations pledged to reduce emissions and limit global temperature rise to 1.5 degrees Celsius (2.7°F) compared to pre-industrial levels. But temperatures could surpass that 1.5°C target as early as next year.

Related: Why a few degrees of warming matter

Extreme weather events will increase and get worse 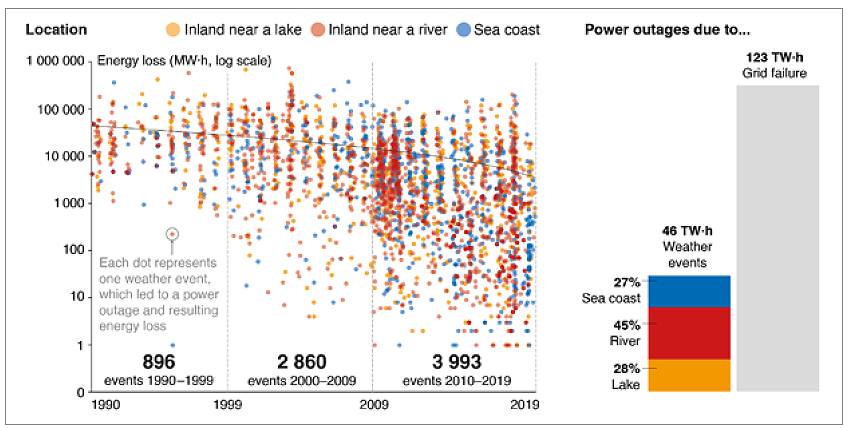 Each dot represents one weather event which led to a power outage and resulting energy loss, since 1990. Outages related to flooding near rivers and along the coasts have increased significantly as Earth continues to warm beyond pre-industrial levels. (Graph: World Meteorological Organization 2022 State of Climate Services – Energy)

As the planet warms faster than ever, extreme weather events will cause more and lengthier power outages, according to a recent report from the World Meteorological Organization. Power outages resulting from extreme weather have quadrupled since the 1990s.

Why COP 27 may be different

Climate activist Greta Thunberg famously has refused to attend COP 27, dismissing such gatherings as all talk, no action, and also in part due to host-country Egypt’s human rights violations. But after three decades of COPs and grandiose pledges but little action, nations and multi-national corporations are bitterly aware of the increasing cost of climate-fueled disasters. In the United States, costs related to such disasters like hurricanes, flooding, and wildfires that once measured in the millions of dollars now are measured in hundreds of billions of dollars, according to NOAA’s National Centers for Environmental Information.

Companies, too, can appreciate the cost-cutting benefits of switching to solar power and electric-powered vehicles. The Inflation Reduction Act of 2022 includes key climate-friendly provisions, like incentives for energy efficiency and purchasing electric vehicles, which will help restore some semblance of credibility of U.S. negotiators at COP 27 — credibility undercut by the previous climate-denying administration when it infamously pulled out of the Paris Agreement.

Also, new jobs associated with renewable energy are increasing globally by the millions each year. Negotiations at COP 27 could lead to increased partnerships between government and industry and increased investment in developing a greener and more reliable power grid, or, research and development in energy storage solutions to further deployment of wind and solar energy.

Climate denial no longer is a thing

Not that climate denial ever was a credible thing, but to continue to deny the worsening climate emergency in the face of towering evidence is heresy. This year has been a litany of unprecedented weekly climate disasters all over the world — killer heatwaves, floods, drought, wildfires — verifiably worsened by rising global temperatures.

As renowned climate scientist Michael Mann reveals in The New Climate War: The Fight to Take Back Our Planet, climate deniers, in desperation, are shifting tactics away from denial. And while those tactics may continue to hinder some action, the era of climate denial most certainly is over, and that’s one less barrier to the urgency for more action.

Optimism for COP 27 and beyond

Faced with the global threat of human-generated compounds destroying the ozone layer, which shields Earth from the sun’s harmful radiation, governments united in 1987 to agree to the Montreal Protocol. And even beyond protecting life on Earth by saving the ozone, recent research found the Montreal Protocol had the added benefit of leading to more carbon sequestration and prevented additional warming of global temperatures by 0.5°C to 1.0°C — a significant amount.

Related: Why a few degrees of warming matter

Three decades of COPs have not yet led to the urgent action required to keep global temperatures from rising, but the urgency no longer can be easily dismissed or ignored. The rising costs of “business as usual” are staggering, for both government and industry, and humanity in general. Negotiators this time around surely can find common ground just as happened leading up to the Montreal Protocol.

Similarly, despite decades of misinformation from the petroleum industry and the maddeningly politicization of climate change, more people than ever before in the U.S. agree the “seriousness of global warming” is generally correct or generally underestimated, according to a rolling Gallup poll dating back to 1997. And groups like the Sunrise Movement are leading the youth grassroots effort pressuring politicians to act and fighting for those who want to act with urgency.

Every COP provides a window of opportunity to drive global change, and, given the growing recognition of the urgency required to avert a climate disaster, COP 27 may be the best opportunity yet.