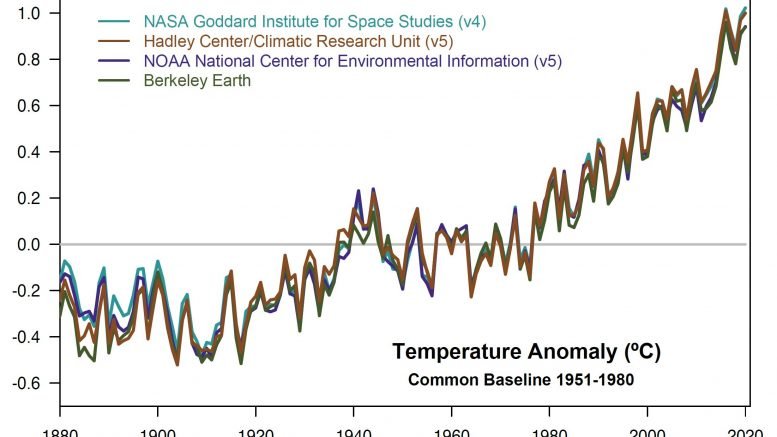 Five temperature records dating back to 1880 show how Earth's global mean surface temperature has risen and keeps rising. All show rapid warming in the past few decades, and all show the past decade has been the warmest. (Credits: NASA GISS/Gavin Schmidt)

With the U.N. climate conference in Glasgow underway, we’ll be hearing a lot more about how greenhouse gas emissions have increased Earth’s global mean surface temperature (GMST) by one or more degrees Celsius (1.8 degrees or more Fahrenheit). But why does the GMST increase matter, exactly?

With local temperatures varying widely around the globe from day to day, from the polar ice caps to the hot temperatures at the equator, averaging thousands of local temperatures into a single “global mean surface temperature” provides a snapshot of Earth’s temperature at a given time. Climate scientists then compare the GMST across different periods of time to understand its natural variability.

The U.S. National Weather Service uses a 30-year range to identify temperature trends unaffected by short-term events like volcanic eruptions, which can temporarily cool Earth’s GMST for a year or more. Such events mask or skew the effect of global heating. For example, the 2001 Mount Pinatubo eruption spewed vast amounts of ash into atmosphere and temporarily cooled Earth by 0.6°C. The eruption did not halt global warming, it merely dissipated the Sun’s incoming heat energy for approximately 15 months. After Pinatubo’s lingering ash cloud dispersed, there was nothing left in the atmosphere to shield the Sun’s incoming energy, and Earth resumed its accelerated warming trend, which is fueled by greenhouse gas emissions. 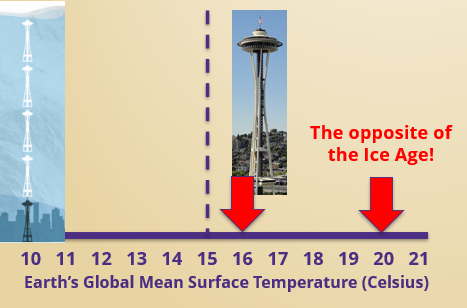 Before recent accelerated global heating, Earth’s GMST was approximately 15°C. Earth’s GMST now is approximately 16°C, which is only 6 degrees warmer than the last ice age, when Seattle was covered in ice a mile thick. We’re on track for another degree of warming or more, and only 5 degrees from the opposite of the ice age. (Modified graph from UW Program on Climate Change Schooner Series Presentation, March 4, 2021).

The same is true for Earth: it doesn’t take much of a temperature shift to negatively impact the type of life it can support.

Earth’s GMST was approximately 14°Celsius during the 1951-1980 span, with approximately 1°C or more warming since, with another 1°C of warming expected, raising Earth’s near-term GMST to 16°C. Such rapid warming has not occurred under natural conditions.

Carbon dioxide levels in the atmosphere in the past 400,000 years have naturally fluctuated between 180 and 280 parts per million (ppm) — until the Industrial Revolution. During past ice ages, CO2 levels were below 200 ppm. And between ice ages, CO2 levels were never higher than 300 ppm. Since the mid 1880s, CO2 levels have risen above 410 ppm and continue to rise. (Modified graph from UW Program on Climate Change presentation, March 4, 2021)

So aren’t we just going through another natural cycle of global warming until the next ice age? No, there is nothing natural about the current level of CO2 in the atmosphere. In fact, since 1960 the annual increase in CO2 levels is about 100 times faster than previous natural increases, according to NOAA and the American Meteorological Society.

Let’s just pull that extra CO2 out of the atmosphere

Other phrases you’ll be hearing a lot are “carbon sequestration” and “carbon capture and storage.” There are a number of geoengineering activities and experiments underway, but removing excess CO2 out of the atmosphere is not easy and, with current technology, cannot be implemented quickly enough to counter rising greenhouse gas emissions. Hence the urgency to rapidly reduce emissions.

As demonstrated this past year with extreme deadly weather events — massive flooding, unprecedented heat waves, severe drought — we’re already experiencing the effects of merely 1°C rise in GMST compared to pre-industrial levels. Just a 1°C increase is changing the jet stream and altering ocean currents, resulting in extreme weather all over the world. The urgency to limit further global heating could not be more clear, and the outcome of this year’s climate conference will determine the severity of future climate extremes with which we’ll all have to live.

How the new climate bill will shift U.S. climate policy