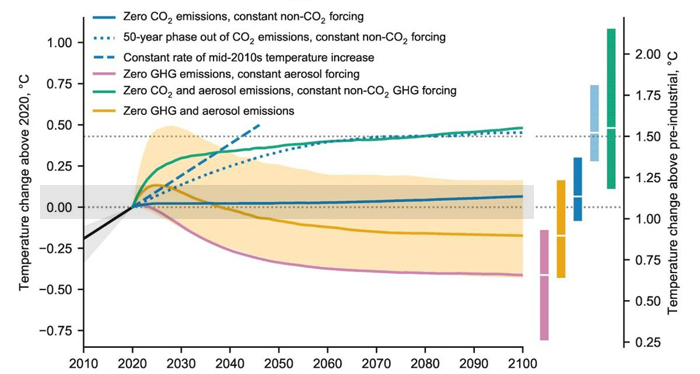 Rising global temperatures could stabilize within 3- to 5-years if greenhouse gas emissions stopped now (dark blue line at 0.00 highlighted area above), contrary to decades of continued warming, which was previously believed. (Source: IPCC)

The gloom-and-doom scenario Earth will continue warming for decades even if we immediately stop emitting greenhouse gas emissions is wrong,

…according to research highlighted in two recent reports from the Intergovernmental Panel on Climate Change (IPCC). Essentially, decades of continued global warming are not “baked into the system,” as previously thought.

From volcanic eruptions to photosynthesis to wildfires to water vapor in the atmosphere, a variety of natural processes involving the element carbon both contribute to global warming and reduce global warming. These are known as carbon sinks, which pull carbon out of the air and store it, and carbon sources, which contribute carbon to the atmosphere in the form of carbon dioxide (CO2).

This carbon cycle has natural variability that was relatively stable until the start of the Industrial Revolution, when humans began burning fossil fuels, which, in turn, has led to an unnaturally rapid infusion of CO2 into the atmosphere — well beyond natural variability, which has disrupted the planet’s climate “equilibrium.”

Carbon released through various processes does not immediately increase global temperatures because it takes time to cycle through more processes until eventually getting stored in a carbon sink or getting released into the atmosphere via a carbon source. Hence, carbon produced at a given time somewhere on Earth can have a lengthy journey before finding its way into the atmosphere and contributing to global warming.

Which raises an important question in our battle to reduce greenhouse gas emissions: Given the complexity of the carbon cycle, if we stopped emissions now, won’t global temperatures continue to rise anyway? Yes, but only for 3- to 5-years, as opposed to what researchers once believed would be measured in decades. This is a profound new understanding that suggests there is a path for limiting rising global temperatures in the near future, even if we can’t stop reducing emissions immediately.

“I didn’t really appreciate this aspect of the science until about five years ago. And it goes back more than a decade,” said Michael Mann, the distinguished professor of atmospheric science and the director of the Earth System Science Center at Penn State University. Speaking at a Feb. 17 joint press briefing by Covering Climate Now and Scientific American, “The Best Climate Science You’ve Never Heard Of,” Mann illustrated how Earth’s carbon cycle processes would be able to stop rising temperatures within a few years, “because natural sinks, particularly the ocean, continue to take carbon out of the atmosphere,” he said.

“It’s taken a while for the scientific community itself to really come to an understanding of this new paradigm,” Mann said, adding, “And it’s been an even slower process to translate that for public consumption.”

The IPCC first noted this 3- to 5-year window in its 2018 Global Warming of 1.5 Degrees C report, and reiterated the findings in last year’s Working Group I contribution to the Sixth Assessment Report. So how did this critical finding get lost in the ether? The text associated with the message was written in cryptic science speak: “Temperatures continue to increase slightly after elimination of CO2 emissions in response to constant non-CO2 forcing.” Of course, revisiting the graph at the top of the post, the solid blue line is practically level through the year 2100 — a slight increase, yes, but oh so slight.

“And so what that tells us is actually, if you stop emitting carbon into the atmosphere, surface temperatures stabilize very quickly within a few years,” Mann said.

“I really do think this is a paradigm shift in the implications of climate science,” said Mark Hertsgaard, Covering Climate Now’s executive director and environment correspondent at The Nation, who co-moderated the press briefing. “And I think these implications fall into what I call the ‘three Ps,’ the psychology of climate, the politics of climate and the policy. The psychology is if you listen to what Mike says here, that to boil it down into a non-scientist terms, is that we can stop the temperature rise within three years once we zero out emissions. So that means that we’re not necessarily doomed after all,” Hertsgaard added.

Mann and Hertsgaard noted multiple climate stressors remain problematic, such as sea level rise and ocean acidification. “But if we lower the emissions quickly, we can get there. We can avoid the worst,” Hertsgaard said.

Mann added, “So it all comes together to tell us that if we want to prevent the surface temperature of the planet, the average surface temperature from crossing that dangerous one-and-a-half-degree Celsius threshold, we’ve got to reduce carbon emissions by 50 percent within this decade.”