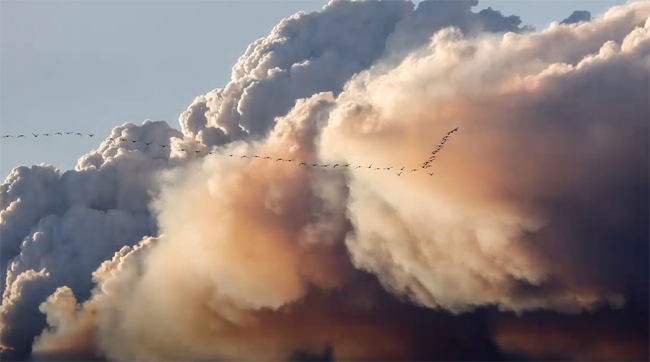 The warming climate is changing the jet stream, resulting in more extreme weather events like heat waves, persistent drought conditions that increase the risk of wildfires, and rain storms that linger over regions for days, causing extreme flooding, scientists warned.

Speaking during a July 27 Skype conversation hosted by ClimateSignals.org, the scientists said the jet stream — the high atmospheric winds that influence our weather — is making bigger north-south swings due to the impact of global warming, setting the stage for weather systems to linger and become more extreme.

“When you’ve got one kind of extreme in one place around the Northern Hemisphere, most likely you’re going to find extremes of other types happening at the same time,” said Jennifer Francis, research professor at Rutgers University’s Institute of Marine and Coastal Sciences.

A heat wave or extreme drought conditions in one part of the country are likely to be countered by persistent rain and extreme flooding elsewhere, Francis added.

“That isn’t a coincidence,” noted Michael Mann, director of the Earth System Science Center at Pennsylvania State University. “It’s because these perturbations in the jet stream have a hemispheric scale. And we see extreme weather all around the Northern Hemisphere like we are seeing this July.”

Cooler temperatures at night can offer some respite to deadly daytime higher temperatures, but if the daytime highs are extremely high, the temperature doesn’t drop enough at night to comfortable levels. “Your body doesn’t have a chance to recuperate,” Diffenbaugh said.

Simulation of maximum temperatures on July 3 from American (GFS) weather model at two meters above the ground. (University of Maine Climate Reanalyzer)

“Had we acted on climate change decades ago we wouldn’t be seeing the extreme and dangerous weather events around the world that we’re seeing this summer,” Mann said.

But, he added, “The good news is that there is still time to avert even more catastrophic impacts on climate change, even more deadly extreme weather events. But obviously we have to act now. We have to shift away from fossil fuels to renewable energy.”

This November voters in Washington state will determine whether to impose a carbon fee on the state’s largest polluters. If initiative 1631 passes, Washington would be the first state to impose such a fee, expected to generate billions of dollars in the coming years. As required by law, all revenue must be dedicated to solving climate-related problems or protecting the state’s environment, so there is no risk of legislators applying the funds elsewhere.

Washington’s green-job growth initiative is expected to draw hostile opposition from special interest groups. Fossil fuel interests have contributed nearly $4 million to spread a veritable plethora of misinformation, as the industry has done for decades. As Mann noted, there still is time to right the ship, and supporting I-1631 is a step in the right direction.

As nationwide midterm elections near, it also is imperative to pressure your representatives — even at the local level — to act responsibly and enact legislation and commit to green energy, and remove the climate deniers from office.

While extreme conditions may linger, smoke from wildfires does not. Its unhealthy particulates this summer have drifted from California to New York, underscoring the reality that even regional events can have far-reaching impacts.