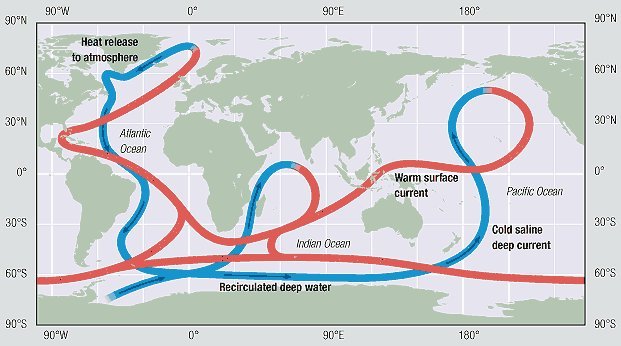 A delicate balance of ocean currents transport heat around the planet and drive global weather patterns. But greenhouse gas emissions are slowing a key Atlantic Ocean current to the brink of collapse, with catastrophic global weather implications. (Source: Intergovernmental Panel on Climate Change)

In the context of the familiar “man versus nature” saying, nature generally appears always to have the upper hand. But man, or, more appropriately, humanity, is flexing its strength.

Not only is human-induced global warming altering the jet stream, now the continued emissions of planet-heating greenhouse gases has pushed a critical ocean current to the brink of collapse, which would dramatically alter global weather systems, according to new research.

The Gulf Stream is the well-recognized ocean current that flows northward along the U.S. East Coast and is part of the larger Atlantic Meridional Overturning Circulation — “AMOC” in scientific shorthand (pronounced EH-mock).

Critical to our everyday and seasonal weather, ocean currents transport heat around the globe. The ocean also absorbs heat, which is a key reason Earth’s temperature range is still human-friendly. The AMOC carries heat via warm waters from near the equator into the North Atlantic Ocean, where the water cools, and, because of its changing density, sinks and flows south to Antarctica.

An AMOC collapse once thought centuries away could occur within decades.

This is known as thermohaline circulation (see image at the top of this post), with “thermo” referring to sea temperature and “haline” referring to its salinity content. Sea temperature and salinity varies around the world, and it is these differences that drive the global thermohaline circulation of which the AMOC — and Gulf Stream — is a critical part. It is the Gulf Stream’s northward heat transport that helps keep Europe’s temperatures human-friendly, because without that heat Europe’s temperatures would be extremely colder.

Such is just one consequence of a slowing or collapsed AMOC — because it is part of the “conveyor belt” of global ocean currents. Any disruption to the conveyor belt has global implications and would change the weather patterns to which we’re accustomed — seasonal rain and snow, why we inhabit the places we inhabit, and why certain regions are more suitable than others for growing crops.

The startling new research published in the authoritative peer-reviewed journal Nature Climate Change adds more clarity to recent studies that AMOC is slowing. More alarmingly, the study found the AMOC “could be close to a critical transition” —  a tipping point that could result its collapse much sooner than expected under current greenhouse gas emission trends.

Because ocean currents transport heat around the globe, changes in the weather would not be limited to one geographic region, such as Europe. A slowing and collapsed AMOC also would shift rainfall patterns in the tropics and accelerate warming Atlantic Ocean temperatures and sea level rise along the U.S. East Coast.

As noted in the recent IPCC report, “it is unequivocal that human influence has warmed the atmosphere, ocean and land.” As such, we now are changing ocean currents and making already extreme weather more extreme. Except, in our new “humanity versus nature” reality reflected in numerous deadly events this summer, nature retains the upper hand. In the context of taking action, another familiar saying comes to mind: There’s no time like the present.