The controversial climate documentary, "Planet of the Humans," with its not-so-subtle nod to "Planet of the Apes" pictured above (Charlton Heston as Taylor and Maurice Evans as Dr. Zeus) puts humanity -- and especially the environmental movement -- on trial. (Photo source: APJAC Productions)

The message humanity is on a path to self destruction is nothing new — and perhaps for all too good a reason — but a new documentary has drawn ire for including the environmental movement as part of the problem. “Planet of the Humans,” co-produced by activist Michael Moore and directed by his long-time collaborator Jeff Gibbs, challenges the promises of wind and solar energy — and even electric vehicles — as a solution to living a sustainable future.

The documentary, which Gibbs notes was years in the making, has been streaming for free on YouTube, with 5.4 million views to date. Not surprisingly, it quickly drew objections from leading environmental activists. As Dan Gearino notes in “6 Things Michael Moore’s ‘Planet of the Humans’ Gets Wrong,” the fact the film was years in the making is part of its problem. Green technology has come a long way in recent years, notably:

In a May 2 essay in The Guardian, Graham Readfearn also criticizes “Planet of the Humans” for being “devoid of solutions” and “long out-of-date.”

Moore and Gibbs have defended the documentary’s content, and Gibbs has posted some responses to objections, citing evidence supporting claims made in the documentary. Despite the controversy, “Planet of the Humans” raises important questions. 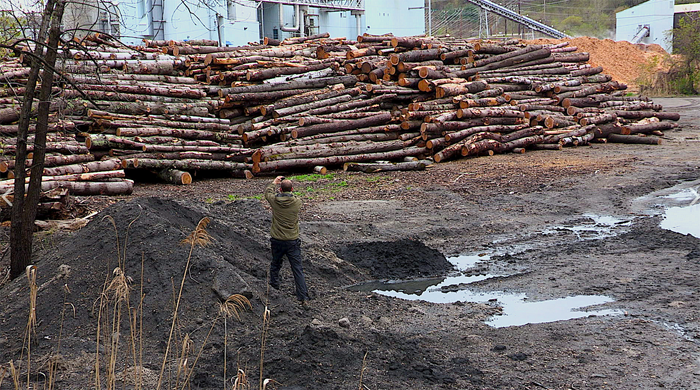 The burning of wood chips to generate “biomass” energy is one area of focus in “Planet of the Humans.” Recent research suggests this can be done sustainably, but not without potential biodiversity losses. (Photo credit: Rumble Media)

In essence, the carbon released when the wood is burned can be recaptured before it enters the atmosphere, but only if ample policy regulation exists to maintain a terrestrial landscape to capture and sequester the carbon. The researchers, led by Alice Favero of the Georgia Institute of Technology, cite a 2016 study that found this “recapture” time ranged from zero to more than one thousand years.

In contrast, a 2018 documentary, Burned, highlights “the accelerating destruction of our forests for fuel, and probes the policy loopholes, huge subsidies, and blatant green washing of the burgeoning biomass electric power industry.”

Burning wood chips, it seems, cannot be sustainable unless policy loopholes are closed. Favero and her colleagues concluded “bioenergy demand could harm natural forests and the ecosystem and the biodiversity services that they provide.” But, with proper management,”large areas of natural forests would remain intact.”

The path forward must diverge from the past

Controversy aside, “Planet of the Humans” raises the critical issue of how should we move forward, knowing our path to date has not resulted in reduced greenhouse gas emissions. After record heat in Antarctica in recent months, meteorologists are predicting 2020 to be the hottest year on record.

Another year of record heat also means 2020 will see the warmest ocean temperatures on record — leading weather forecasters to expect “a chaotic year of extreme weather.” Hurricanes draw their strength from warm ocean temperatures, and temperatures in parts of the Atlantic Ocean and Gulf of Mexico already have hit record highs.

Clearly, as global economies return in force as the COVID-19 crises eases for however long it takes, humanity once again will be thrust into the reality of the climate emergency. The question is, will humanity resume its self-destructive “Planet of the Apes” scenario, or will the wisdom of a sustainable future prevail? The future is guaranteed to be what we make it.