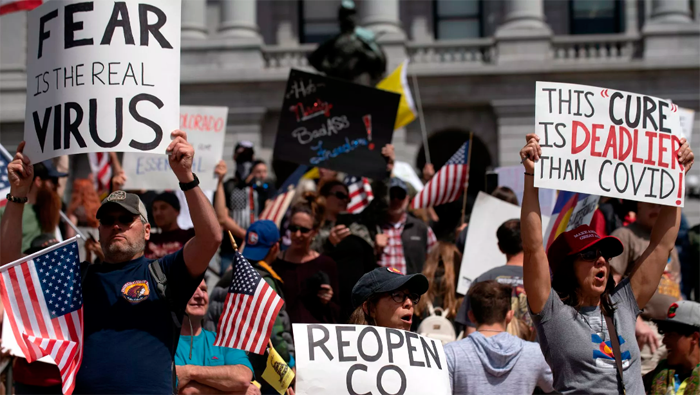 Demonstrators gather in front of the Colorado State Capitol building for a "reopen Colorado" rally in Denver on April 19. (Photo: Jason Connolly/AFP via Getty Images)

Setting aside the rumors of how COVID-19 came to upend our lives, here’s a compilation of recent stories on the healthy path forward when the crisis eases.

Decades of insidious tactics by the fossil fuel industry to undermine fact-based evidence human activity is fueling the climate emergency has set the stage for COVID-19 deniers, who employ similar tactics to dismiss the potent threat of the virus, according to experts on climate science.

It may seem unimaginable for a health risk to be politicized. After all, there’s no partisan divide about cancer or heart attacks. But in this new Age of Deceit, false claims about the virus — fueled by a right-wing group — are leading people to dismiss valid medical advice from doctors and epidemiologists, contributing to a greater health risk.

Ways to avoid the next pandemic

Thomas Lovejoy, the scientist who coined the term “biological diversity,” told The Guardian the COVID-19 pandemic “is the consequence of our persistent and excessive intrusion in nature and the vast illegal wildlife trade, and in particular, the wildlife markets, the wet markets, of south Asia and bush meat markets of Africa.” He said separating wild animals from farmed animals in markets is one way to “significantly lower the risk of disease transmission.”

A recent study published in the journal Proceedings of the Royal Society B echoes Lovejoy’s concerns. Researchers linked 142 viruses to the list of threatened species, and blamed declines in biodiversity and endangered wild animals “whose populations had declined largely due to hunting, the wildlife trade and loss of habitat.”

C02 levels are dropping, but for the wrong reason

A Carbon Brief analysis cites a significant drop for global oil demand in its estimate C02 emissions will drop by 5.5 percent this year compared to 2019. With economies shutting down and stay-at-home policies limiting travel, we’re burning less fossil fuel, which is good for the climate, but for the wrong reason. It should not take a pandemic to force us to reduce air pollution, but a reduction in air pollution may limit the spread of the virus, according to new research. So, as we eventually ease back into whatever the new normal will be, addressing air pollution should be a priority.

A somber celebration for Earth Day

The 50th anniversary of Earth Day promised to include a global mobilization to highlight the environmental problems world leaders continue to neglect, as well as promote actionable solutions to address the climate emergency. But the stay-home, stay-safe policies limited activists and scientists to present their messages online. Specifically, when the COVID-19 crisis passes, they urge world leaders to rebuild the global economy on a more sustainable track.