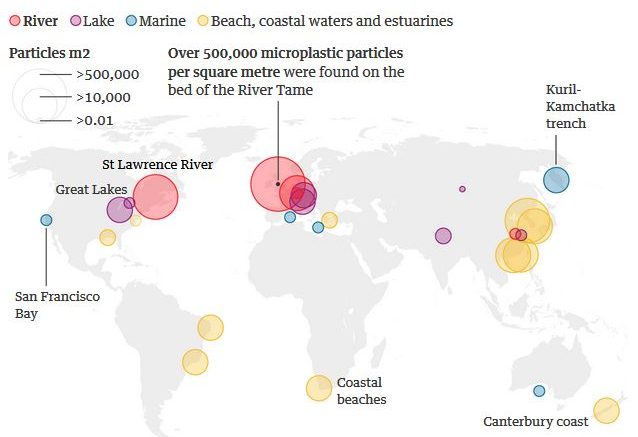 The River Tame, near Manchester, U.K., has the highest microplastic pollution yet discovered anywhere in the world.

Five trillion recently was the estimated number of microplastic particle pollution in the ocean — 5,000,000,000,000 — but new research has led scientists to believe the number is exponentially higher.

An analysis of sediments in 10 rivers near Manchester U.K. found microplastics in all but one of 40 sites, and a subsequent analysis following floods of 2015-16 revealed 40 billion pieces of the microplastics had been flushed into the sea. Thus, the current estimate of 5 trillion is a gross underestimate, according to a study published in Nature Geoscience.

The River Tame had the highest amount of pollution: 500,000 microplastic particles per square metre in the top 10 centimeters of riverbed. And because not all rivers have been analyzed, researchers believe the the pervasiveness of microplastic pollution is similarly impacting rivers worldwide.

Microplastics are known to harm marine life, negatively affecting the food web, and have been found in tap water worldwide.