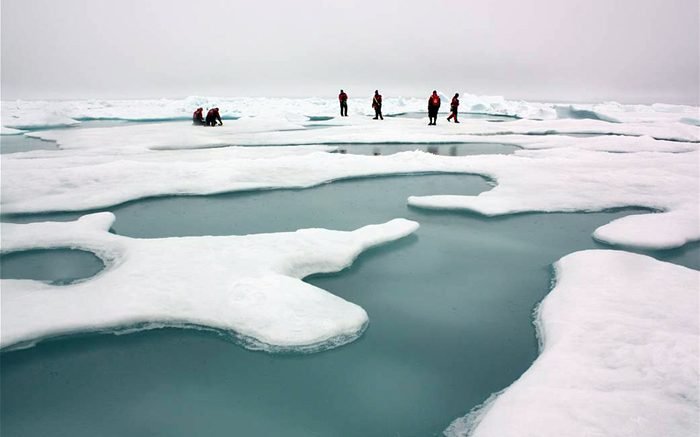 There was a lot more summertime sea ice in the Arctic in 2010, when scientists pictured above were there to collect ice and water samples. With less and less summertime sea ice, the Arctic absorbs more heat from the sun, which, growing evidence suggests, is altering weather patterns worldwide. (Photo Credit: NASA/Kathryn Hansen)

As summertime temperatures get hotter and hotter each year, more and more Arctic sea ice melts. But the rapid annual decrease in sea ice isn’t just affecting the polar bears or the coastal indigenous communities. Rising Arctic temperatures are influencing weather patterns thousands of miles away, shifting patterns of drought and extreme rainfall along the U.S. west coast, according to new research.

The study, published Jan. 27 in the journal Proceedings of National Academy of Sciences, identified two ways the warming Arctic can alter weather patterns. The primary effect of hotter than normal temperatures there is the resulting warmer atmospheric winds flow back toward the equator, creating a Central Pacific El Niño, which influences weather in Asia and Oceana. Secondarily,  winds rebound northward back toward Alaska, which impacts the atmospheric rivers and droughts on the west coast.

Though inconclusive, the study’s results “add to the evidence that loss of Arctic sea ice is having a major impact on climatic variability around the world,” the researchers wrote. The new findings also are consistent with past research linking the warming climate with drastic swings in the jet stream over North America. Other recent research has identified a link between a warming Indo-Pacific Ocean with monsoons in India and heat waves and flooding in the U.S. 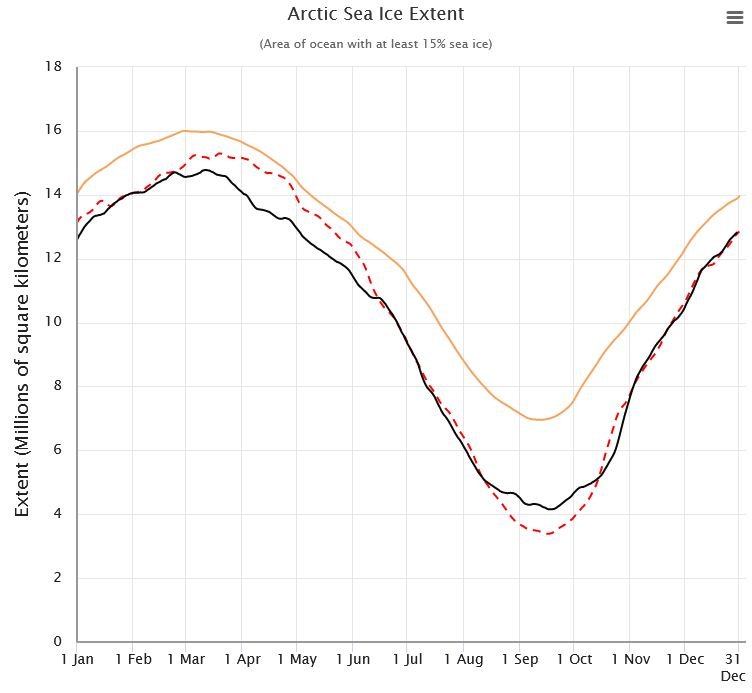 Arctic sea ice grows during winter months and then melts during the lengthy sunlit summer months. The orange line is the 1979-1990 average, the black line is the 2019 extent, and the red dotted line is the record low in 2012. The total volume of Arctic sea ice has reduced by 75 percent due to rising global temperatures. (Source: National Snow & Ice Data Center)

The summertime Arctic sea ice is important because it reflects the sun’s radiation (heat) back into space. But with more carbon dioxide in the atmosphere, generated by burning fossil fuels, the heat gets trapped and accelerates the ice melt. This feedback effect is why the Arctic has experienced record high temperatures in recent years, and also why there is less and less summertime ice.

As data gathering methods improve, scientists are better able to identify specific events worsened by rising global temperatures, such as the devastating wildfires in Australia or the epic flooding in the Midwest.

However, the uptick in more extreme natural disasters isn’t the only reason to be concerned about the impact humans are making on the planet by failing to transition away from a fossil-fuel economy. A new study has identified a link between violence against women and environmental degradation, a result of the worsening climate emergency, and all the more reason to curb emissions.