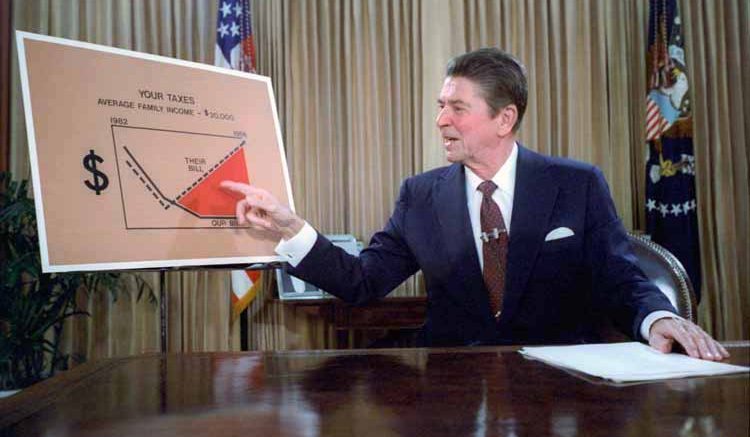 Then-President Ronald Reagan uses a graph to highlight the alleged benefits of his supply-side economics plan, yet the upward red-shaded trend in his graph is prescient in terms of rising global temperatures. (Source: Wikimedia Commons)

It has been only three months since the 2018 midterm elections, yet more than a dozen politicians, celebrities, and truly successful business leaders already either have filed to run for U.S. President, or have expressed their intention to do so. And why not? History has confirmed what all elementary school students are promised: anyone can be elected President.

And as Americans become increasingly aware of and alarmed by the costly consequences of human-induced global warming — including disasters costing billions of dollars in 2018 — climate change already is emerging as a key campaign issue.

The high cost of doing nothing

But despite the growing costs of climate-related disasters, the Green New Deal introduced in Congress already has attracted criticism for lack of detail and, ironically, for how much it might cost taxpayers. Without details, a cost-benefit analysis is nothing but conjecture, but there is no disputing the reality of the increasing cost of climate-related catastrophes. 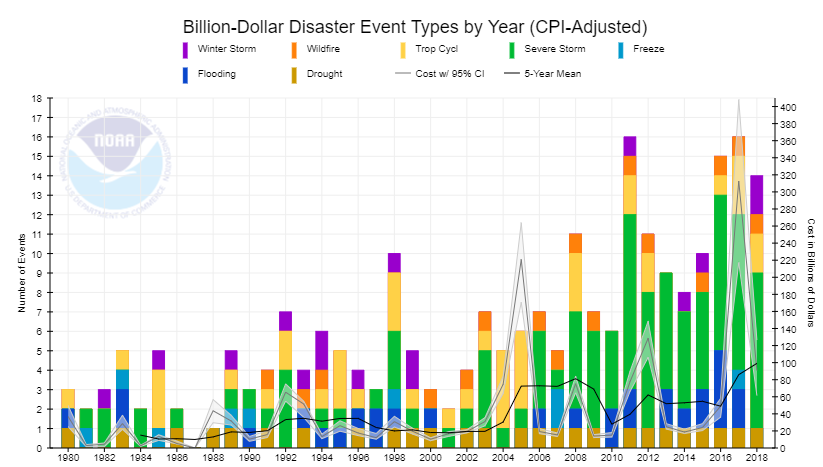 The Green New Deal, introduced by Rep. Alexandria Ocasio-Cortez (D-NY) and Sen. Ed Markey (D-MA), is a framework that would commit Congress to take significant action in the next 10 years primarily to reach net-zero carbon emissions and invest in technology to remove carbon dioxide — a key greenhouse gas — from the atmosphere.

Global warming won’t leave anyone behind

Climate change also was top of mind at this year’s World Economic Forum — the annual gathering of some of the world’s top business leaders, economists, politicians, and even celebrities. Held each year in Davos, Switzerland, it is a gathering allegedly devoted to the most pressing issues facing the world. Yet despite urgent calls for climate action by Sir David Attenborough and teen activist Greta Thunberg, another major gathering of leading decision makers ended with inaction on global warming.

Not surprisingly, inequality also was a hot topic among the Davos elites, because, if a handful of people amass a majority of the world’s wealth, who, then, will be left to make them wealthier? The economic “recovery” since the 2009 financial crisis has left nearly everyone behind, creating an ever-widening wage gap, exasperating inequality not just in the United States, but worldwide.

As wages stagnate, the elites hover ever higher in their expanding stratosphere of wealth, but there is no escaping the ubiquity of global warming.

Yet the empty promises of trickle-down economics persist. Former President George H. Bush famously coined the phrase “voodoo economics,” and now even Trump supporters are infuriated after realizing the Republican Party’s tax bill favors only the wealthy, despite promises to the contrary.

As 2018 officially was the fourth hottest year on record, the Green New Deal will be a litmus test for candidates in the next election.

After all, the only thing trickling down are the catastrophic effects of global warming.