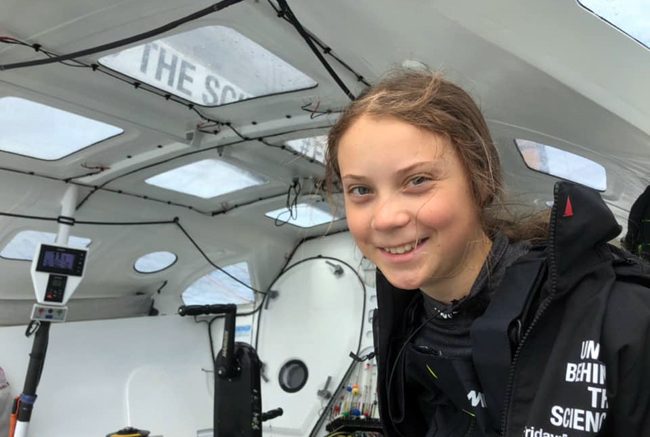 Greta Thunberg makes a statement about our carbon footprint in her zero-emission transatlantic sailing journey. (Source: Her Facebook page)

Thunberg, who has Asperger’s Syndrome, began a weekly school strike in August 2018 to protest the Swedish government’s inaction on the worsening climate emergency. Since then, Thunberg has inspired millions of people of all ages all over the world to protest and urge elected officials to do their jobs and enact policies now to address the climate emergency. And with that inspiration has come wave after wave of criticism.

THE GRETA THUNBERG HELPLINE:
For adults angry at a child. pic.twitter.com/JAtIKyG4Va

This past week, Thunberg wrote on her Facebook page, “I honestly don’t understand why adults would choose to spend their time mocking and threatening teenagers and children for promoting science, when they could do something good instead.”

We are still two years away from the next comprehensive report on the global climate from the United Nations Intergovernmental Panel on Climate Change, but interim reports collectively warn of dire consequences if there is no collective action to reduce greenhouse emissions and quickly transition to renewable energy:

And as Thunberg continues to lead and inspire, shaming world leaders for inaction, the hate piles on.

“I guess they must simply feel so threatened by us,” Thunberg wrote of her adult haters. “But the world is waking up.”

And given what’s at stake, Greta Thunberg does not care about your insecurities.