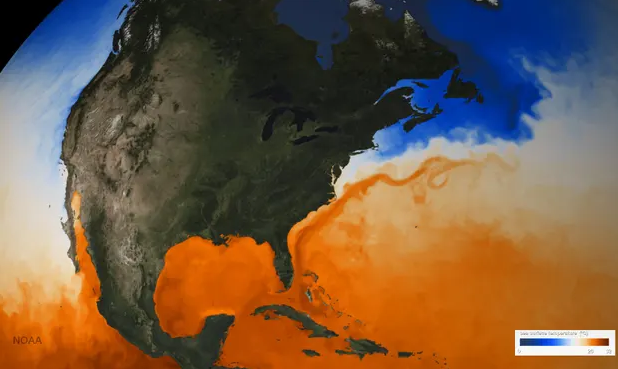 The latest book about the climate emergency highlights how the weakening Gulf Stream, which carries a prodigious amount of heat from the tropics to the seas around Europe, could collapse and trigger powerful winter storms. (Photo: NOAA)

Blistering heatwaves are just the start. We must accept how bad things are before we can head off global catastrophe, according to a leading UK scientist.

The publication of Bill McGuire’s latest book, “Hothouse Earth,” could not be more timely. Appearing in U.K bookshops this week (and August 9 in the U.S.), it will be perused by sweltering customers who have just endured record high temperatures across the U.K. and now face the prospect of weeks of drought to add to their discomfort.

And this is just the beginning, insists McGuire, who is emeritus professor of geophysical and climate hazards at University College London. As he makes clear in his uncompromising depiction of the coming climatic catastrophe, we have — for far too long — ignored explicit warnings that rising carbon emissions are dangerously heating the Earth. Now we are going to pay the price for our complacence in the form of storms, floods, droughts and heatwaves that will easily surpass current extremes.

The crucial point, he argues, is that there is now no chance of us avoiding a perilous, all-pervasive climate breakdown. We have passed the point of no return and can expect a future in which lethal heatwaves and temperatures in excess of 50 degrees Celsius (120℃F) are common in the tropics; where summers at temperate latitudes will invariably be baking hot, and where our oceans are destined to become warm and acidic. “A child born in 2020 will face a far more hostile world that its grandparents did,” McGuire insists.

In this respect, the volcanologist, who was also a member of the UK government’s Natural Hazard Working Group, takes an extreme position. Most other climate experts still maintain we have time left, although not very much, to bring about meaningful reductions in greenhouse gas emissions. A rapid drive to net zero and the halting of global warming is still within our grasp, they say.

Read the full story at The Guardian: ‘Soon it will be unrecognisable’: total climate meltdown cannot be stopped, says expert