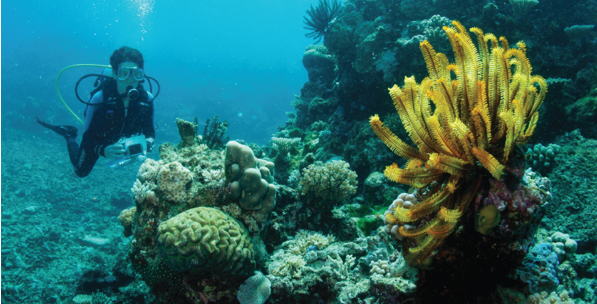 A SCUBA diver approaches corals in the Great Barrier Reef, which lost more than half of its coral between 1995 and 2017 due to bleaching events and other stressors. (Photo: Great Barrier Reef Marine Park Authority)

A recent coral bleaching event affected 91 percent of the Great Barrier Reef. The permanent damage remains unknown, yet the reef’s future may not be as bleak as it seems — if we act accordingly.

Note: This article highlights some of what I’ve learned about the reef while conducting research for a case study I produced for a recent course at the University of Washington School of Marine and Environmental Affairs, where I’m pursuing a graduate degree.

Mass bleaching events triggered by rising ocean temperatures – resulting from human-caused greenhouse gas emissions – continue to threaten the Great Barrier Reef. In fact, this past year’s bleaching event was the fourth in the past 7 summers. Marine heat waves that cause bleaching are the marine equivalent to extreme heating events like the killer Heat Dome that struck the Pacific Northwest in 2021.

The 2,300 km Great Barrier Reef could cover large swaths of Europe and North America. The reef has suffered 6 bleaching events since 1998, affecting 98 percent of its corals. (Source: Australian Government).

The GBR contains 10 percent of Earth’s coral reef ecosystems, but more than half of its coral was lost between 1995 and 2017 — primarily due to the human-caused stressors of global heating, ocean acidification, and pollution. Damage from storms and the coral-killing Crown-of-thorns starfish are other threats to the GBR the Australian government tracks.

In contrast, only two percent of Florida’s coral reefs remain — primarily, again, due to human activity.

However devastating bleaching events can be, some corals can and do recover. Bleaching results when zooxanthellae — the algae that live inside hard corals and provide their color — are ejected from the corals when stressed by warmer-than-usual sea temperatures. With the colorful algae gone, the corals appear white, or “bleached.” The length of abnormally warm water temperatures is one determining factor of whether the bleached coral can rebound or not. 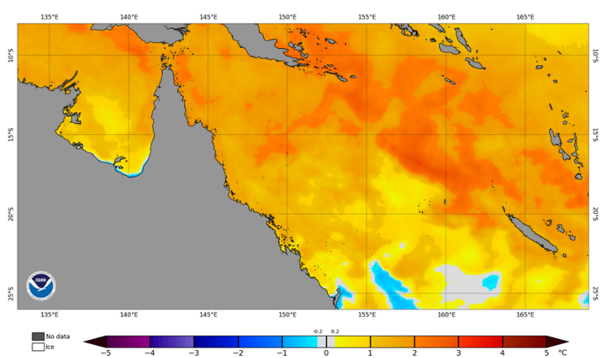 Time is another factor affecting a reef’s ability to recover from a bleaching event, but the increasing frequency of marine heat waves is interrupting the recovery. Healthy coral growth is measured in centimeters each year — one to 10 cm, depending on the species. But “ecological memories of heatwaves” inhibits the recovery time by 10 years and even longer, according to research led by Terry Hughes. 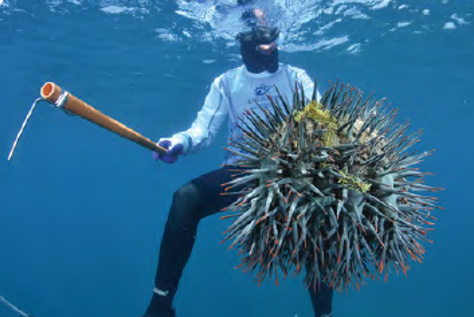 A snorkeler removes a Crown-of-thorns starfish from the Great Barrier Reef. (Photo: GBRMPA)

The ocean absorbs 90 percent of excess heat generated by human-caused global heating. Hence, much like rising global surface temperatures, ocean temperatures are rising, too. Just as we humans have a temperature range conducive to our survival, so do reef-building corals. But ever increasing ocean temperatures at the GBR will result in more bleaching events, leading marine scientists in Australia to urge their government to accelerate the country’s carbon emission reduction plans.

About one quarter of marine life interact with coral reefs at some point, but if global temperatures reach 2.0°C above pre-industrial levels, most reefs are unlikely to survive. With greenhouse gas emissions continuing to rise, it’s possible by next year temperatures will reach 1.5°C above pre-industrial levels — and if not in 2023 then certainly within the next five years at our business-as-usual rate of emissions.

How to save the Great Barrier Reef 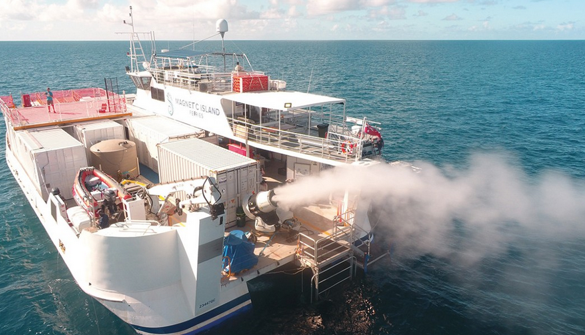 Climate change is “the single greatest challenge to the Reef,” according to The Great Barrier Reef Marine Park Authority’s latest annual status report. So until humanity transitions away from burning fossil fuels, what can be done to save the GBR and other reefs around the world?

Marine Cloud Brightening (MCB) is an emerging field of research considered to be among the most predictable and safest forms of climate engineering because it’s designed to impact a relatively small area. An MCB canon (pictured above) shoots microscopic seawater salt particles into the air, which drift up into low marine clouds to increase the clouds’ brightness, in turn reflecting more of the sun’s energy back into space. Tests are ongoing at the GBR to determine if this method can help keep the reef’s waters cool enough to prevent or minimize bleaching. 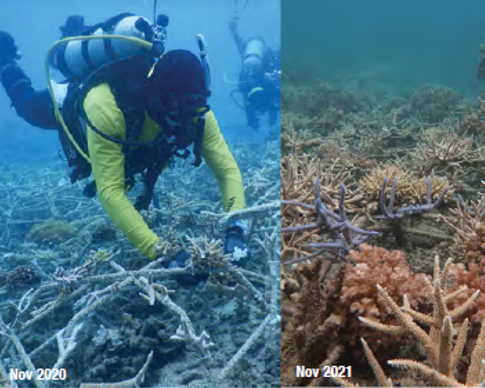 Prior to this past summer’s bleaching event, coral fragments from healthy reefs were successfully transplanted onto an area that had bleached (pictured above). Within 6 months coral cover increased from 15 to 25 percent, and fish species interaction increased by 25 percent.

The GBRMPA also is engaging reef visitors with its free Eye on the Reef app, which allows anyone to share their observations while at the GBR. The data gathered via the app can be viewed by anyone via the sightings network website.

It’s encouraging the Australian government is so committed to protecting and restoring the GBR, but even the $3 billion spent over the last 10 years could not protect the reef from the recent devastating bleaching event. The only way to prevent future killer marine heat waves is to tackle global heating at its source: to accelerate the global transition to clean energy, such as wind and solar power, and accelerate the reduction in greenhouse gas emissions.

But this isn’t about just the GBR. New Zealand also suffered its largest bleaching event ever recorded, also due to a lengthy marine heat wave. Such stories will become commonplace until humanity reverses its destructive dependency on burning fossil fuels — and the destruction won’t be confined to coral reefs.