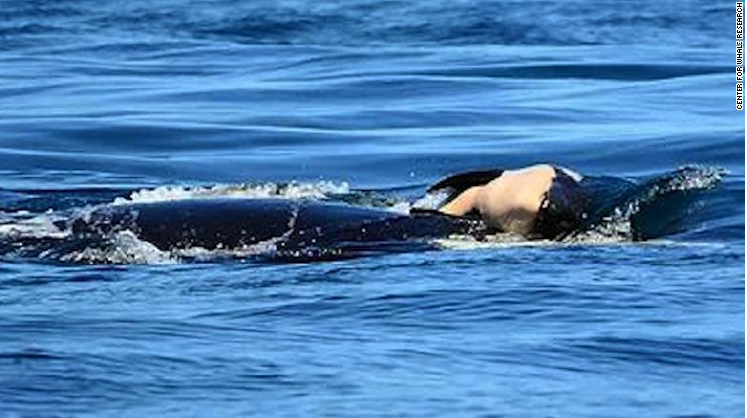 The orca Tahlequah grieved the death of her calf for 17 days and 1,000 miles. (Image: Center for Whale Research)

In the summer of 2018, the story of a grieving orca mourning the death of her calf captured the world’s attention. The orca, Tahlequah, had given birth to what is thought to be the first calf born to the Southern Resident killer whales since 2015.

The birth was a sign of hope for an endangered population of orcas, whose numbers continue to decline. Sadly, the calf died shortly after birth, and Tahlequah, in an unprecedented show of mourning, pushed the dead calf, carrying it on her nose, for 17 days and some 1,000 miles.

The population of the Southern Resident orcas who frequent Puget Sound is down to 76 — a 20-percent decline since the 1990s. And Ken Balcomb of the Center for Whale Research believes less than 5 years remain for reproduction of “viable” offspring to save these orcas from extinction. Two orcas were born in 2019, but, sadly, scientists fear two more orcas are at risk of dying this summer due to starvation. Could our Puget Sound stewardship — or lack thereof — be to blame?

Scientists know the Southern Residents favor Chinook salmon, but regional salmon populations — particularly Chinook — have been declining for decades, forcing the orcas to travel farther to eat, and increasing risk of malnutrition. 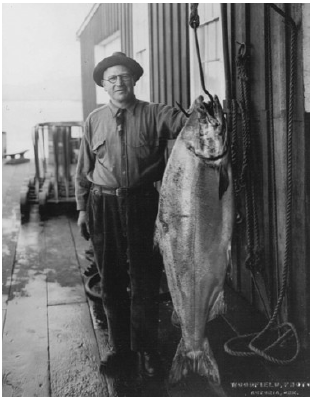 From 1915: A Chinook salmon in Astoria, OR. (Source: Columbia River Maritime Museum)

Additionally, salmon are smaller than they used to be, and younger, too. Ironically, researchers believe marine mammals are partly to blame, but they also cite overfishing as another major factor.

It wasn’t too long ago that Seattle was a rugged frontier logging town with a population in 1870 of a mere 4,128. In 2018 the region’s population topped 4 million, according to the Puget Sound Regional Council. Since 2010, Seattle’s population has increased nearly 20 percent, making it the fastest growing U.S. city of the decade.

Essentially, it has taken a mere 150 years to transform what once was a pristine Puget Sound estuary into the region’s toilet bowl. According to the state Department of Ecology, stormwater runoff is the primary urban pollution problem in the state. As much as 66,000 pounds of pollutants are released into the Puget Sound ecosystem every day, with an economic cost of $1 billion over a 10-year period. 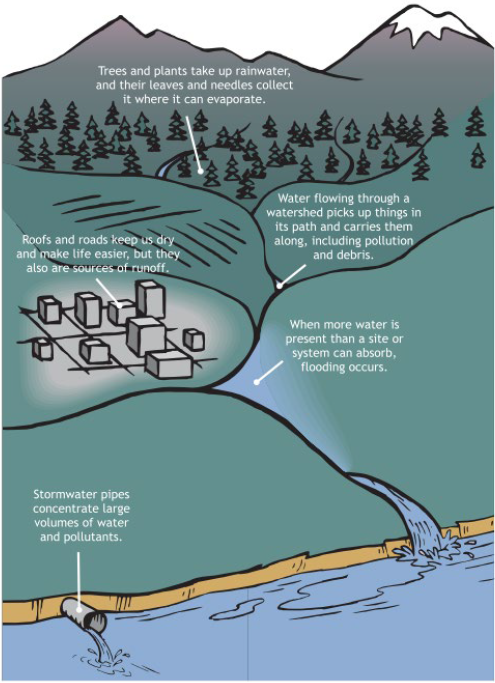 What happens in the Puget Sound watershed eventually drains into the Puget Sound, including pollution that can harm wildlife. (Source: Washington State Department of Ecology, publication #07-10-058)

Particularly troubling, runoff that includes pesticides and fertilizers are particularly damaging to salmon, because the copper in the products interfere with the salmon’s ability to avoid predators and even find their spawning streams.

And lingering industrial pollutants — polychlorinated biphenyls (PCBs) and dichloro-diphenyl-trichloroethane (DDTs) — continue to contaminate the regional food web. Biomagnification has led to extraordinarily high levels of contaminants not just in the Southern Residents, but also in the transient whales, who, just for visiting, unwittingly consume Puget Sound contaminants. Unlucky them. 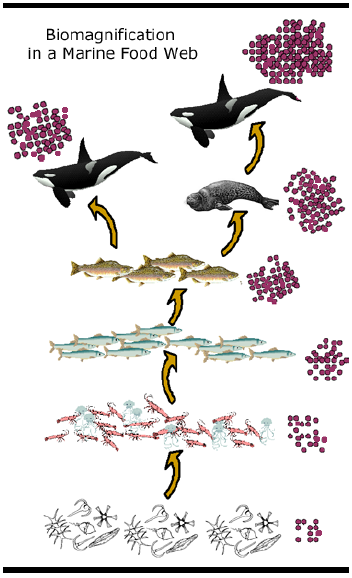 The red dots represent contaminants, illustrating how they magnify through each trophic level of the food web. (Source: Port Townsend Marine Science Center)

The Puget Sound has 1,332 miles of coastline (excluding the San Juan islands and Strait of Juan de Fuca). The opportunities for pollution to drain into the Sound are vast, and, as the state Department of Ecology indicates, our ability to contaminate the Sound is unfortunately quite efficient. 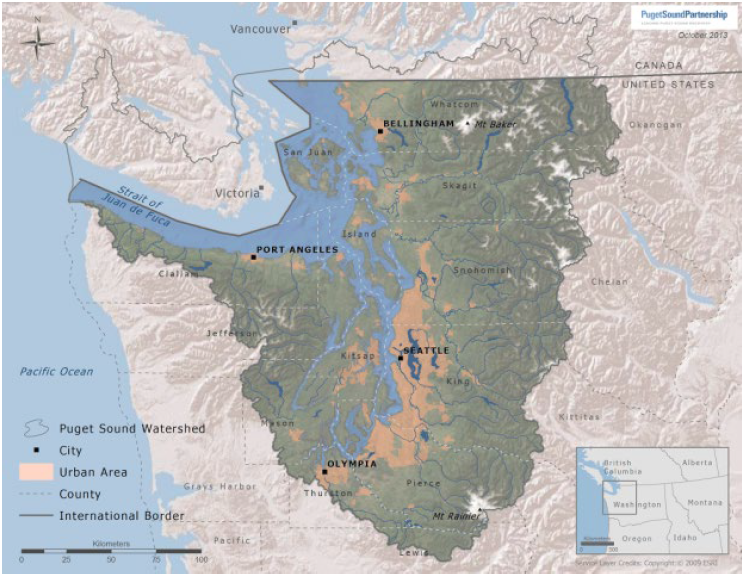 The Puget Sound Partnership’s Action Plan is an ambitious collaborative restoration effort, but many of its bold initiatives are below 2020 target levels. Clearly, something must change.

Toledo, Ohio voters recently overwhelmingly approved a Bill of Rights for Lake Erie, granting it the legal right to be protected from harm from human activity. As legal guardians of the lake, residents can sue polluters to pay for cleanup costs and pollution prevention programs. And two years ago, a New Zealand river was granted the same legal rights as a human being, ending a 140-year dispute between the indigenous Maori people and the government. The Maori had finally succeeded to have the Whanganui River legally recognized as an ancestor. And Pittsburgh, Pennsylvania was the first U.S. city to pass a Community Bill of Rights, which led the charge by other state and local governments to ban fracking.

It’s encouraging to see such pro-environmental legislation gain favor around the world, yet its necessity is a poor reflection of how humanity has managed its natural, life-sustaining surroundings. As our region continues to grow, and efforts to protect the Sound fall off pace, it’s time for a Puget Sound Bill of Rights. It’s time to start treating the Puget Sound like a member of the family that it is, and to give it the protection it deserves.